The band cadets learn music theory and participate in the squadron band. Interested cadets without a music background can still join the band as some instruction and instruments are provided. The band attends the regional competitions and band cadets may also attend band courses in the summer.

The band can be heard at the squadron during the monthly Commanding Officer’s parade and at Annual Parade.

Band Practices Tuesday Nights 1830 to 2100  weekly starting September 13 at Squadron HQ. Extra Practices for Band Comp will be on Sundays time to be announced in January. Practices TBA.

Band Clinic for the Fraser Valley is in November in Abbotsford. This clinic is for music testing and the advancement of music levels from Basic to Level 5. In order to become a Drum Major cadets must be Level 3 Qualified before becoming Drum Major qualified at Band Clinic.

Each year the cadets design a Hoodie that they wear to Band Comp as a Team. We do our best to keep costs to cadets between $30 to $40. Hoodie design will be completed by December and ordered end of January. 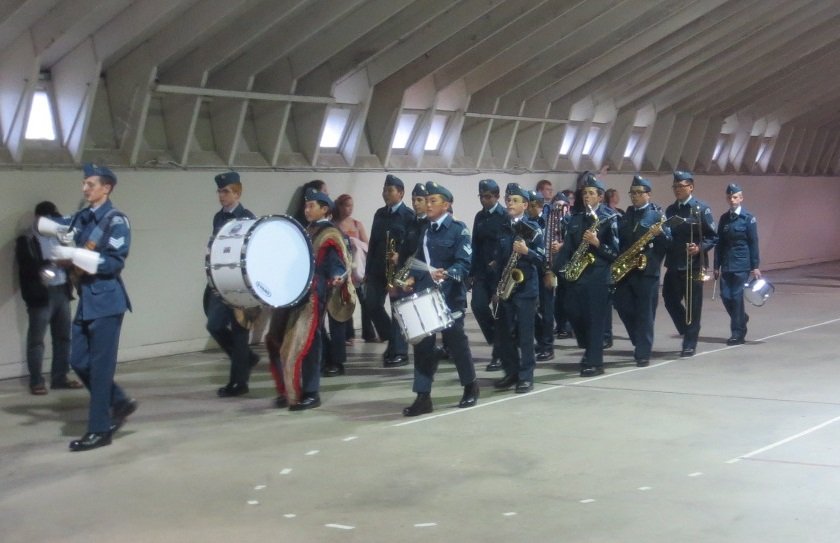 583 Coronation Squadron RCAC
Reminder, this Thursday, 26 Jan, is the 2nd Cadet Fitness testing night. This is mandatory for Cadets to be eligible for promotion. Cadets are to wear appropriate Sports clothing including their Cadet Blue FTU T-shirt. Make sure you bring a pen as you will need to record your results and bring your water bottle.
View on Facebook

583 Coronation Squadron RCAC
Cadets please see the attached link to the Air Cadet League of Canada Scholarships. If you are interested in these please speak with Major Taylor

Post-Secondary Education Scholarships are provided by donors, and are administered by the Air Cadet League National Air Cadet Scholarships and Awards (NACSAC) Committee. All eligible candidates will be considered.
View on Facebook

583 Coronation Squadron RCAC
A reminder to all Cadets and Parents.

This Thursday is Movie night at the Hollywood 3 in Pitt Meadows at 19190 Lougheed Highway Pitt Meadows, BC V3Y 1B3.

1. Do not come to the squadron.
2. Cadets need to arrive by 6pm. You should be done by 9pm or shortly thereafter.
3. Do not wear your uniform.
4. The Sponsoring Committee is paying for Admission, a pop and a popcorn. Anything else is at the Cadets own expense.

583 Coronation Squadron RCAC
We hope everyone had a wonderful Christmas and New Year's.

Cadets starts back up on Tuesday 3 Jan with Band/Flag Party/Flight night. See everyone at 1830 hrs.

Also just a reminder that Capt Baldwin will be down from 1830-2000 hrs to sign out FTU boots. Please see the newsletter for available sizes. Any questions please email 583air@cadets.gc.ca

583 Coronation Squadron RCAC
Merry Christmas to all the Cadets, Parents, Sponsoring Committee and Staff, may you all have a wonderful, relaxing and joyous Christmas with family and friends!
View on Facebook

583 Coronation Squadron RCAC
If any cadets are interested in participating in the Provincial Cadet Advisory Council please contact Major Taylor via email at 583air@cadets.gc.ca.

Reminder, this Thursday, 26 Jan, is the 2nd Cadet

Cadets please see the attached link to the Air Cad

A reminder to all Cadets and Parents. This Thursd

Merry Christmas to all the Cadets, Parents, Sponso

For those cadets that don't have FTU boots or the

Tomorrow is the last day for Coffee/Hot Chocolate

What did you do this weekend? Cadets of 583 Corona

*Band and Flag Party and cancelled for tonight. Pl

Last weekend, the Cadets had the opportunity to go

FYI all. A few other reminders. 1. Don't forget

We are kicking off our first fundraising event of

“They shall grow not old, as we that are left gr

Operation FALL BACK 🏕🧭🪓 The Cadets last

Just a sample of some of our hardworking Cadets du

583 Coronation Squadron is active from September to June, and meets each Thursday evening from 6:30pm to 9:30pm on the Albion Fair Grounds in Maple Ridge. All youth aged 12 to 18 years are welcome to join this youth-oriented program.
Please feel free to drop by and visit if you would like to talk with our Officers or Cadets about the Air Cadet Program.

Join to receive the weekly 583 Squadron newsletter. We will not sell or distribute your email address to any third parties at any time.